Thank you for indulging me as I share my thoughts about my recent trip to the Netherlands.  It made a big impact on me in many ways, including creatively.   Since I felt so inspired while I was there I thought it might be nice to share some of that inspiration with you also.

By our 4th full day in the Netherlands, I’ll admit I was falling in love with the Dutch way of life. A little voice in the back of my head was trying to finagle a way to move our little family there for a year.  Our hotel was on a quiet beautiful residential street, surrounded by schools.

Each night as we would walk from the tram back to our hotel I’d imagine what life was like for the people who lived on that street… and feel a little pang of envy.  The thought of living on a beautiful canal, walking to get groceries every day and riding a bike instead of driving my giant car seemed so dreamy.

I’m sure I was over idealizing the thought of a little sabbatical… but it was nice to dream for a bit.  I was also brought quickly back to reality from my little “dream” when I realized there were 3 Porsche’s and one Bugatti parked on the quaint little street we walked down each evening… something tells me we could not afford the rent 🙂

On Saturday, we woke up early and headed to the Rijks Museum.  We had contemplated going to Zaanse Schans for the day, but the weather looked “iffy” and I knew that I was not ready to have say goodbye to Amsterdam.    We spent the rest of the day there.

The Rijks museum was undergoing renovations while we were there but was still open.  However I don’t think we saw the entire collection as the inside of the museum was no where near as big as it looked from the outside.

Inside were a few of the famous Dutch Masters including Rembrandt and Vermeer.  I had always heard that photographs of Rembrandt’s did not do them justice, and I have to say that everyone was right.

There was just an extra “something” to all of his paintings that the others in the galleries did not possess.  I was surprised how much I liked them… I could have sat and stared at his portraits all day.

The star of the show was of course, the Night Watch.  It’s HUGE.

There are not many Vermeer’s in the world and I felt lucky to see 3 while there.

It’s easy to see why Vermeer was so famous for his use of light in his paintings.

After touring the Rijks we still had a few “must do’s” left on our list for the day and decided to spend the rest of the day wandering the city. 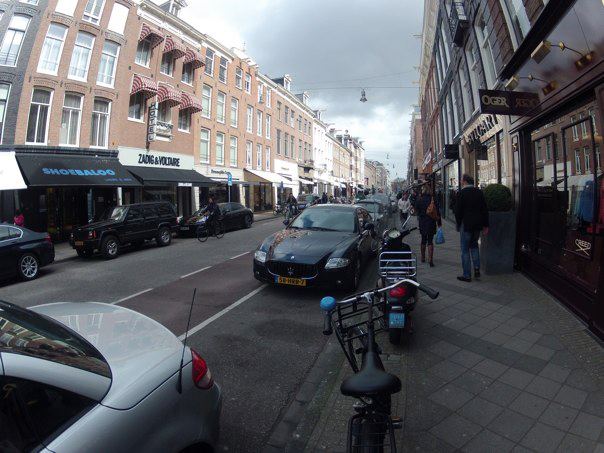 We walked over to PF Hoofstaat, one of the big shopping streets in Amsterdam. We went in a couple of stores then realized that the real show was out on the street.  My husband armed with his GoPro camera found more than one of his “dream” cars to photograph.   No more stores after that, just more time spent ogling at fancy cars. 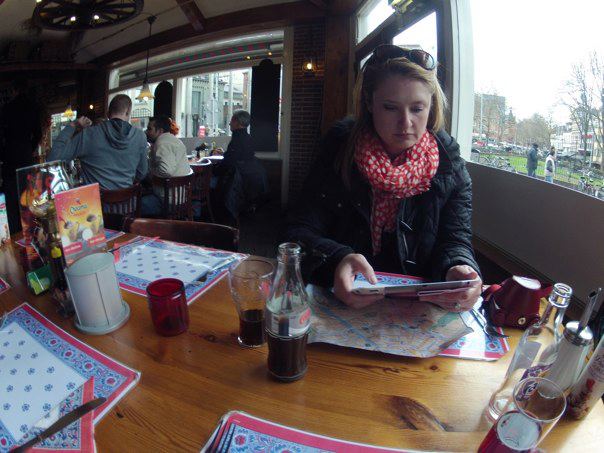 Next on our to do list was to have some Dutch pancakes.   I didn’t take a photo of one, I should have but they are thicker than crepes and thinner than American pancakes.   They were delicious and lived up to the hype.

Jeff took his Go Pro camera with him…I should just be glad he didn’t bring along the helmet mount for it and wear it on his head the whole trip, (which he would totally do)…  –  He doesn’t always warn me when he’s taking a picture, Did you know there is a museum of only Handbags in Amsterdam?  We of course had to go… I had one more “ticket” on my Holland Pass to use so headed towards the museum.  (Hey it was that or the torture museum,—  I’ll take handbags).

We walked though the antique district and had fun peering in all of the windows.

I wonder if one of these would fit in the airplane over head bin?

This store specialized in antique Delft.  There were some absolutely gorgeous pieces in there.  The little homes that line the window at the bottom are ceramic houses that KLM used to give to their first class passengers.

Many of those tiles are taken out of homes, they just chipped them right off the backsplash.  Some of them date back to the 1600’s!! There was a little stack in the store that you could just “thumb” through.

We spent about an hour trying to find one that we liked well enough to buy,  and did not cost a zillion dollars.  Let me tell you… making decorating decisions abroad is NOT FUN… I knew I’d go home wishing I’d bought something else.. or have a “why didn’t I think of that” moment.

We finally settled on one that was framed beautifully, and I can’t wait to hang it in my dining room when I get it repainted.

We arrived at the Museum of Bags and Purses late in the afternoon. It was small but incredibly well done, in a beautiful canal side home.  It explained the origin of the handbag, then showed examples of how it’s evolved over the years. I took a ton of photos, I’ll share a couple now, but am going to save the rest for a separate post.

After touring the museum I was spent. I think I’d seen enough and the adrenaline was finally wearing off and I was SOOO tired. We tried to walk around a bit but I was afraid I’d get hit by a tram car, or a bike, I was so sleepy.

We went back to the hotel and took a quick nap. My intention was to walk somewhere for dinner that night but we ate at the hotel instead… which I wish we didn’t… It was good,  but overpriced…. and there were so many other great options to pick from.

The next morning we headed back to the States, and after a long but uneventful flight were reunited with our kids and their Grandma who I’m sure was glad to send them back home again!!

** just a note: I’ve received quite a few emails about where we stayed and ate etc.. I’ll do a post just on travel resources for easy reference.

Day One: The City

Day Two: To Delft and Back