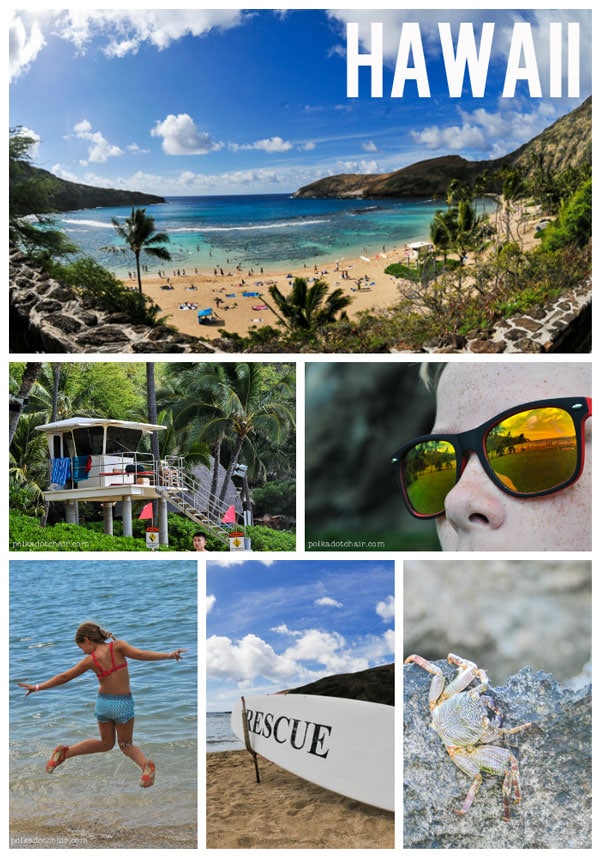 I thought I’d share a bit with you about my very first trip to Hawaii!  I was not going to share much about my trip here on my blog, but then my husband protested… he says that he really enjoys reading the posts about our trips. Plus I do have to admit that I frequently go back and print off my blog to use in our family scrapbooks.   I thought I’d include the trip as part of my Saturday Snapshots series, in which are more personal than crafty.

First let me say, no part of this post is sponsored at all  (if it were I’d be sure to tell you). If I mention a company it’s just because I think they deserve a shout out for being awesome that’s all… 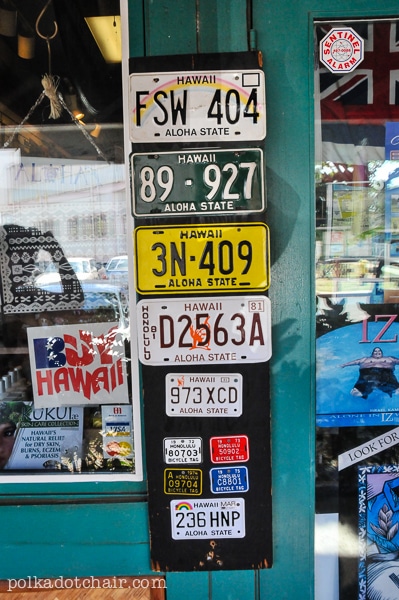 Well….. all of that traveling in 2012 resulted in quite a few frequent flyer miles. We were able to take those miles and combine them with our Disney Vacation club points and book a trip to Hawaii for a reasonable amount.  We had a kitchen at our awesome resort (Aulani) so we cooked some meals in, and used Yelp to find reasonably priced restaurants on the Island.  I also read the ENTIRE guide book that we bought, which helped us narrow down what we wanted to do. We bought the Go Ohau card which ended up saving us bunches on several of the places we visited (we did the same thing in NYC, which I still need to write about).  Hawaii is not a bargain destination by any means, but we did manage to make it a bit more affordable. 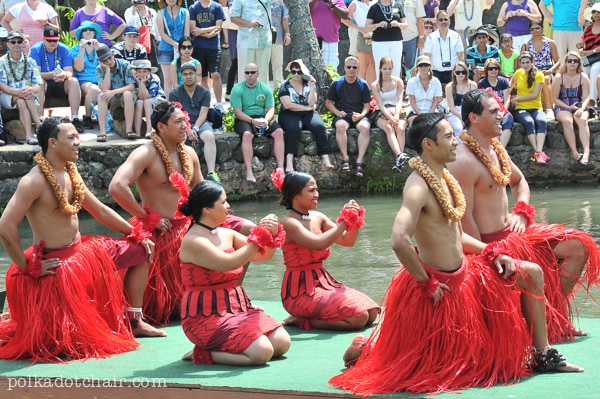 Let me just say Hawaii is very very far from where we live. It took 2, 6 hr flights and a 7 hr layover for us to get there. This is the main reason we’ve never been before…. it’s so much closer to go to the Caribbean or Florida if we want a beach.  I didn’t “get” why it seemed EVERYONE went to Hawaii…. wasn’t it just a string islands? (okay no Hawaiian’s shoot me now kay?)… 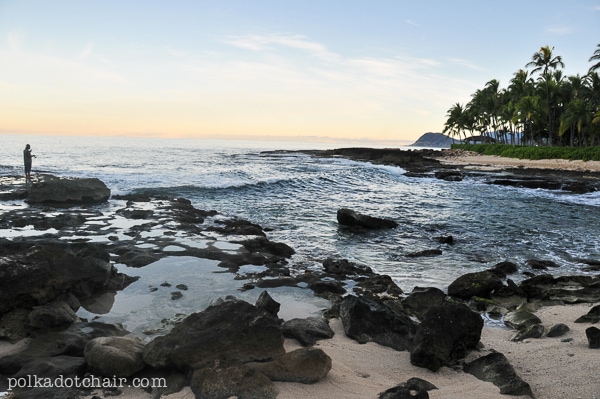 I quicky learned that Hawaii is so much more than just a string of Islands. It’s a place that has beauty like no other place I’ve been in the world combined with a rich and vibrant culture.  We were in heaven.

After spending our first day at the resort recuperating from the insane travel day before by doing not much more than laying by the ocean, we were anxious and ready to hit the road on day 2. 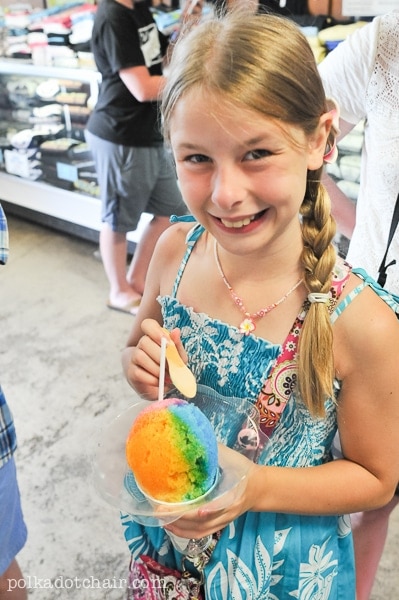 On today’s agenda: The North Shore and the Polynesian Cultural Center. 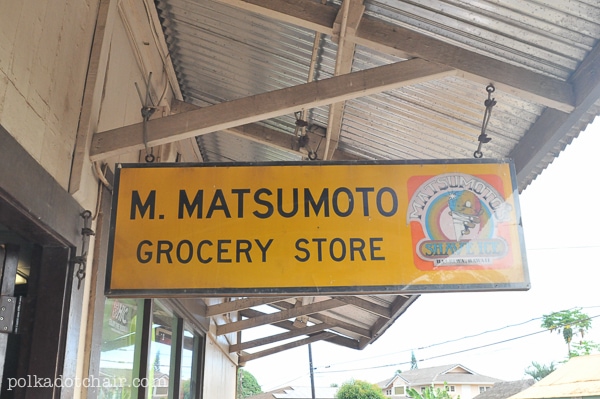 If I heard “Mom when can we get some Shaved Ice?” one more time I was going to scream, and we’d only been there 24 hours.  So our first stop was at the famous Matsumoto’s on the North Shore.  The kids all stuck to just the ice and Jeff and I tried it with the beans & ice cream.  Not a big fan of the beans, and I discovered later in the trip that my favorite shaved ice is half with syrup and half plain. I know I’m weird, but it was too sweet for me otherwise. 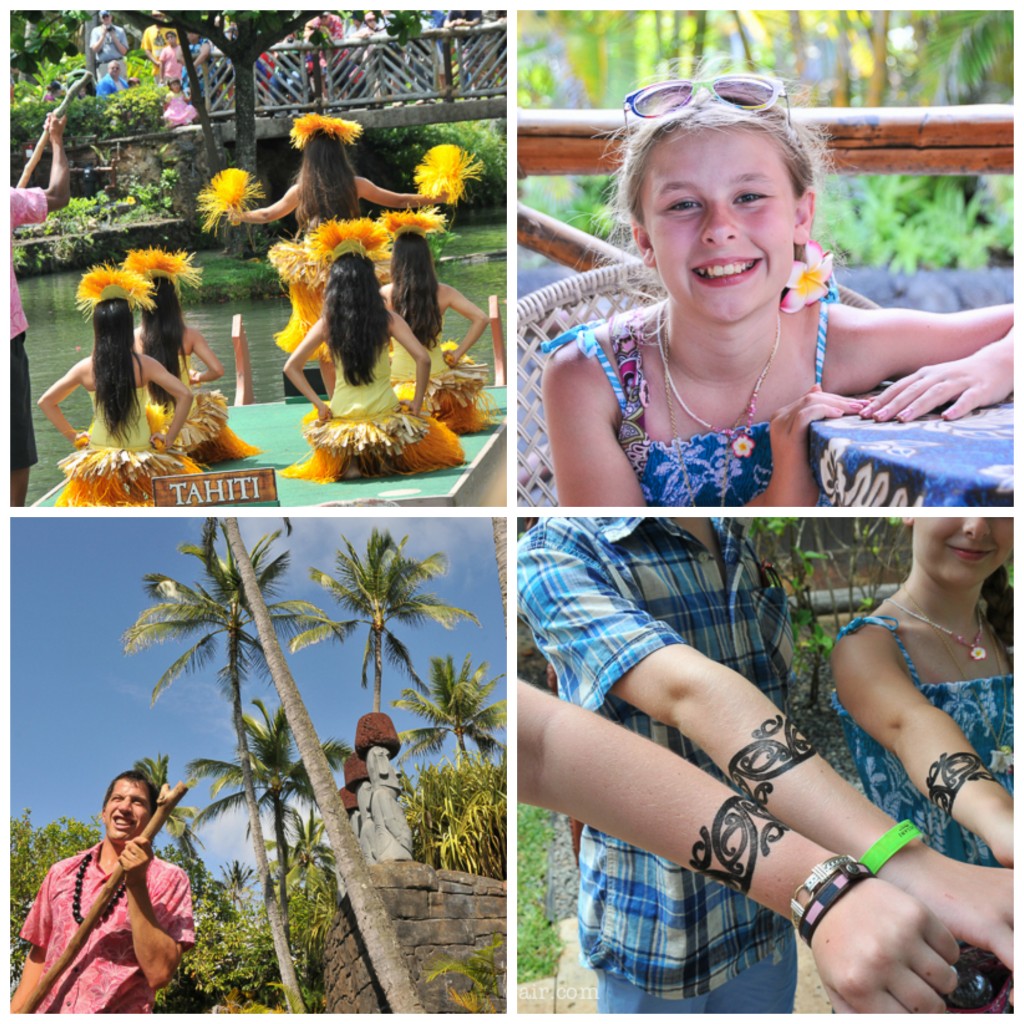 After meandering around the North Shore and stopping by the world famous Shrimp Trucks we made it to the Polynesian Cultural Center. Okay first, did you know there are Shrimp Trucks on Oahu? I didn’t, and as shrimp is one of my all time favorite foods it we had to stop. 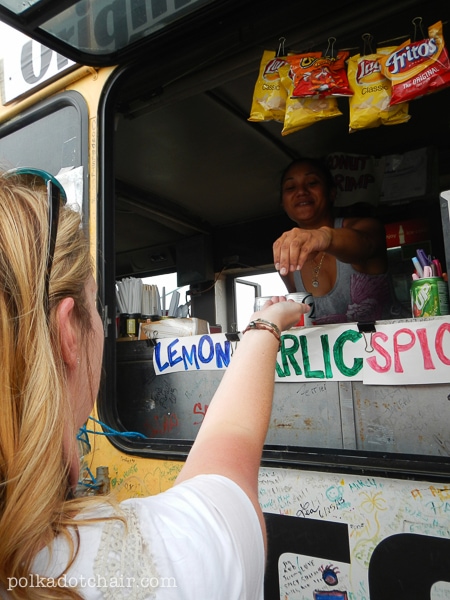 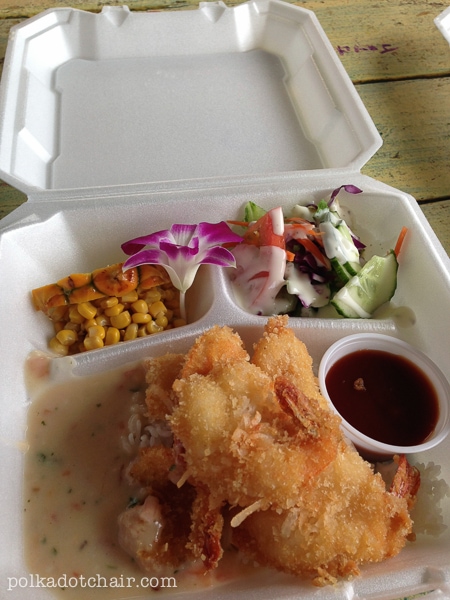 It was my “2nd” lunch for the day but I did not care.  (Lunch #1 was an amazing Mahi Sandwich at Kua Aina) 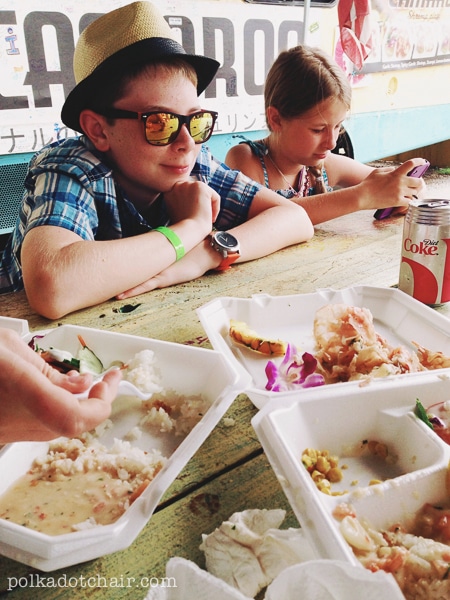 It was delicious and even my finicky kids agreed when by some miracle they decided to try some of the Shrimp. 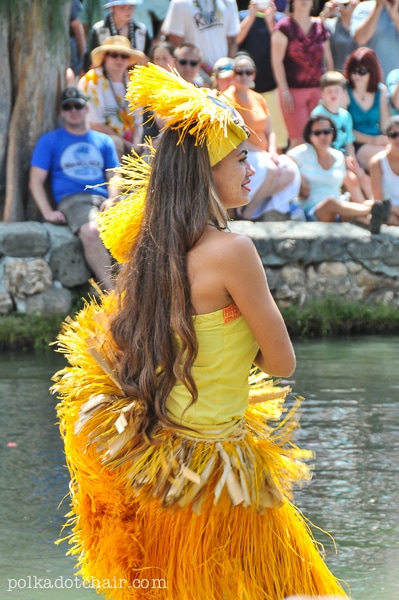 The Polynesian Cultural Center came highly recommended and did not disappoint. We liked just wandering around a bit better than trying to hit all of the “showtimes”.    We stayed for the Dinner Show that night got back to the hotel very late and tired from a good day exploring. 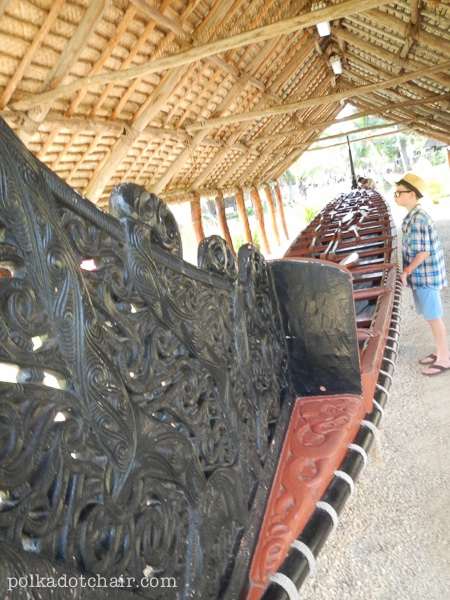 Luckily we got there in time to get tickets to the USS Arizona Memorial (you can reserve online but we waited to long and the online reservations were full).

My husband is an avid reader and has read most all of Ambrose & Goodwin’s books about WW2, along with about every other book written on the subject.  He’s a huge history buff and made sure that the kids were fully aware of what we were going to see that day. 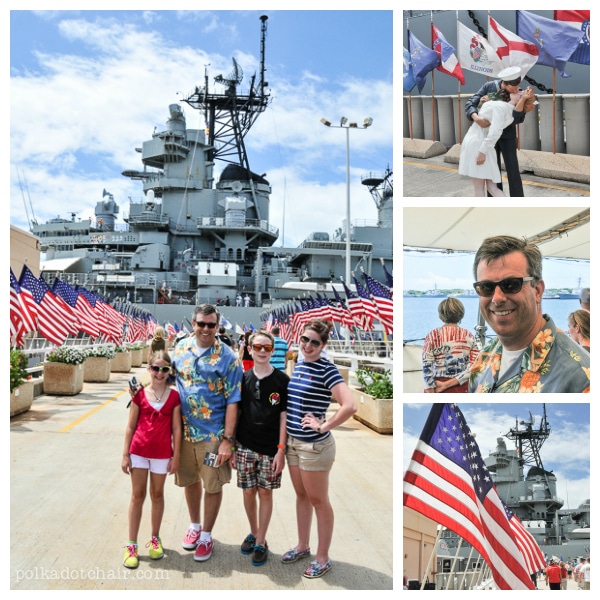 My Grandfather was stationed at Pearl Harbor during WW2. He was not there when it was bombed but later in the war.  He was in the Navy and I’ve always had a soft spot in my heart for this place.   As Jeff would say we started the tour “backwards” as we began on the USS Missouri, the location of the treaty signing ending WW2.

I was expecting Pearl Harbor to be moving, but what I was not expecting was that it was also fun. They had 40’s music playing and Ford’s Island has many original buildings left from that time period. 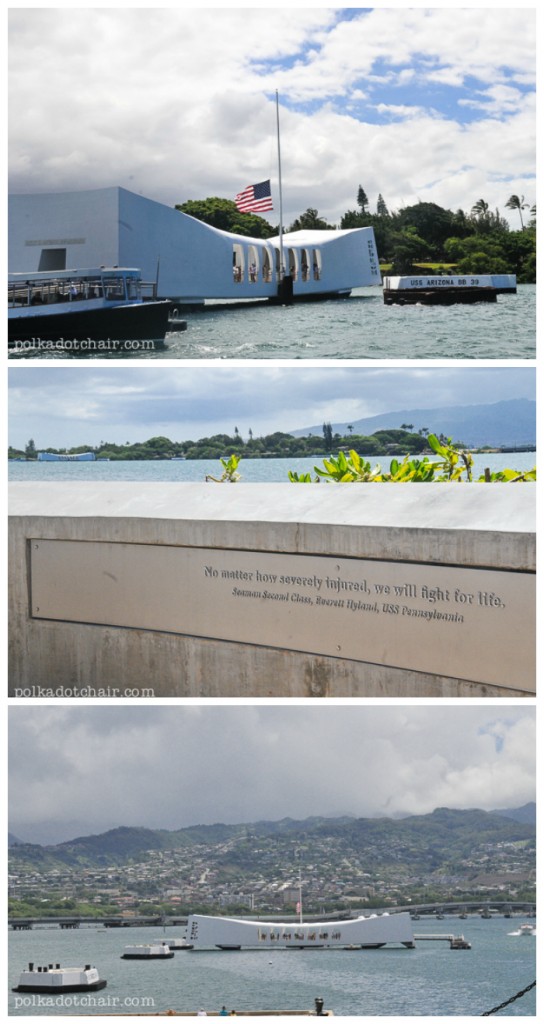 After touring the Missouri, and a brief visit below deck to which I promptly said “get me out of here” as it’s quite cramped. We had deepened our respect for those who served in military. 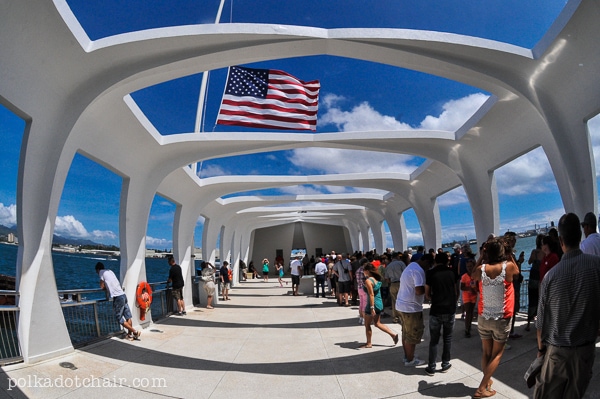 Before you visit the USS Arizona Memorial you watch a video that goes through some of the history of that day.  My youngest daughter started crying during the movie, it was pretty moving to think of what happened to all of the soldiers that day.

I had spoken to the kids earlier about what type of behavior was expected at the Memorial but there wasn’t really any need to, they knew what was going on. 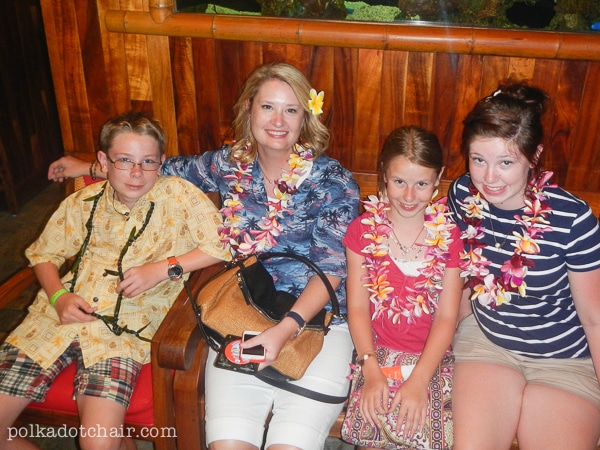 Last stop for the day was dinner on Waikiki Beach. We were all tired and very hungry by that point and figured you couldn’t go to Oahu with out at least visiting Waikiki Beach.  We had dinner by the beach at Duke’s.  Then back to the hotel… so that we could get up early AGAIN the next morning to go somewhere!

We have to “camps” in our family… my oldest daughter and husband who are of the “I came all the way to Hawaii I’m not staying at the hotel” mindset, and me and the little kids, who are of the “Can’t I just lay by the pool?” mindset.    These two days kept my adventurers  happy… the next two were better suited for the lazier among us. But you’ve read enough for today… more on that one later.