Hello all! My name is Emily and I am Melissa’s little sister. Melissa has asked me to share a little bit about myself and tell you all the secrets of my kid’s quirky Halloween costumes. 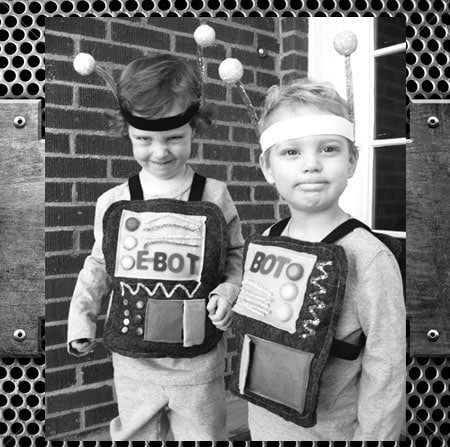 Before we begin, take a moment to see them in action for the full effect:

A little about me:
Melissa is the crafty one, I am the Internet nut. I design websites,  Need one? (emilymillard at gmail dot com) I am wife to Ethan and mother to Bubby and the Weeb (pronounced like weed, with a b at the end = Weeeeeeeeb). Bubby is four and the Weeb is two. My Ethan likes to talk a lot and KSL pays him to do it. He is obsessed with Eastern Europe and is currently working on a documentary about the Romanian revolution of 1989 (yes, there was a revolution in 1989, who knew, hence the documentary). He changes most of the diapers, sometimes cleans the TV and frequently makes me eggs for breakfast. If you think you can make eggs better than Ethan you’re totally wrong.

Bubby adores trains, likes to sing and refuses to watch TV as much as his mother lets him. I’m so proud. He has gorgeous red hair and huge blue eyes like daddy. The Weeb is crazy, non-stop and always hungry. He likes cookies, his froggy, cookies, cookies and sometimes cookies. He has curly blonde hair and half blue half brown eyes. It’s true. His eyes just started to change a few months ago.

We live in Utah, I have never lived anywhere else. Whatever you are assuming about me after reading that sentence is totally and completely wrong. 🙂

Onto the costumes!
Meet C-BOT and E-BOT. My little (as they would say) wo-bots.

Elliott wanted to be a robot but we were concerned about him sitting through 3 hours of preschool in a large cardboard box. So I simplified the traditional robot costume.

I used felt for the whole costume. I found a perfect grey felt at our local fabric store. I used simple polyester felt because I found some that was nice and thick. If you want the costume to last years, I’d suggest using wool felt.

All in all the costume was pretty simple.

That’s it! These would make great birthday presents or just something for the toy room, year round. 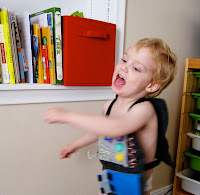