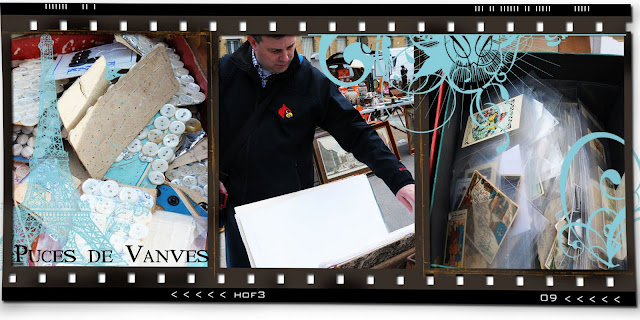 I wanted to go to a Parisian Flea Market, I had read about them and thought there would be some good shopping. However I didn’t know which one to go to, or how far was too far to go for one. I’d never been to Paris before and spoke only about 10 words of French, so I was a bit nervous. (and those 10 words of French I knew, never came out when I tried to speak them!!)

The night before Jeff & I decided to venture out to Puces De Vanves market. Puces St. Ouen is larger, but I had read about both and thought De Vanves would be more my speed.  Plus we had driven by Puces St. Ouen on the way to our hotel and it looked SOOO big…I thought it might be to much to tackle for us.. 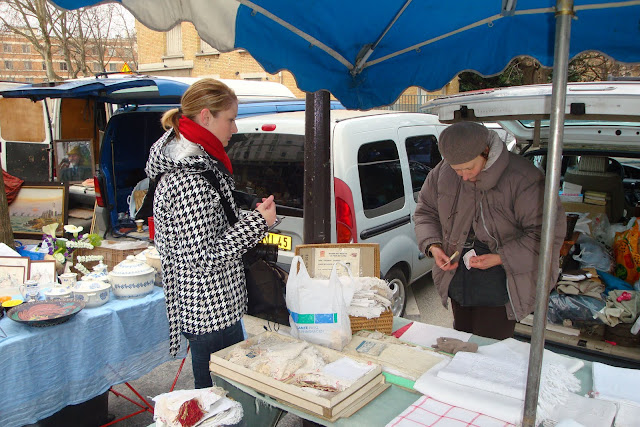 As usual, it did not disappoint!  We rode the subway there and it was only 1 block from the subway stop.  I found some great ribbons & trims, an old camera, vintage postcards, antique house numbers & some other fun stuff.  You’ll be seeing bits and pieces of it all in the coming months here on the blog.
The prices were fair but by far not cheap. I wanted some antique brooches but most were more than 30 Euros… I’m sure a fair price but more expensive than I was looking to pay. 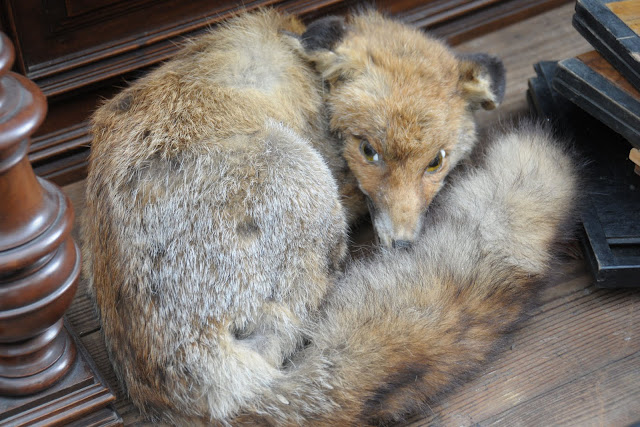 I’m VERY glad we went to the Flea Market, not just because of the treasures I found, but also because it was in a neighborhood… It felt very authentic and it was nice to get out and walk around a bit where you feel like people actually live.

We stayed at the Flea Market until my toes were frozen then hopped on the Subway back to the center of the city. 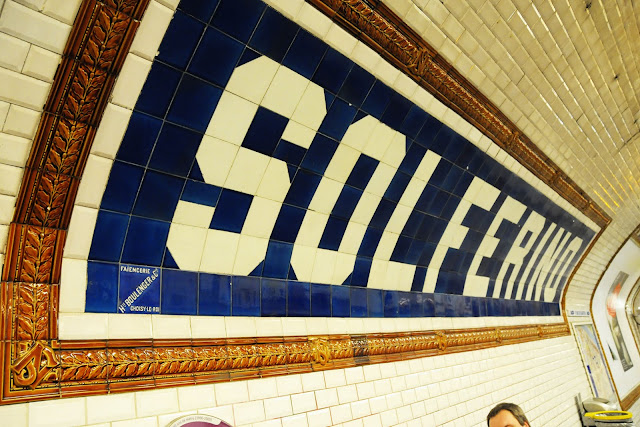 After getting off at the wrong subway stop (well it was the right stop, just not as close to where we were going as we thought), we hit the Musee d’Orsay. 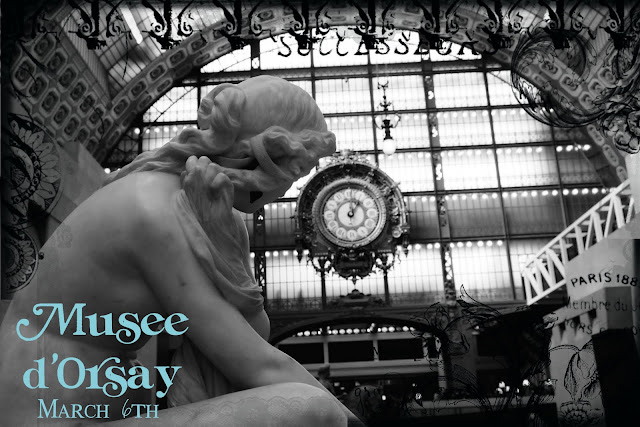 I was really looking forward to this museum.  It holds many many many famous impressionist works and is in a spectacular building. 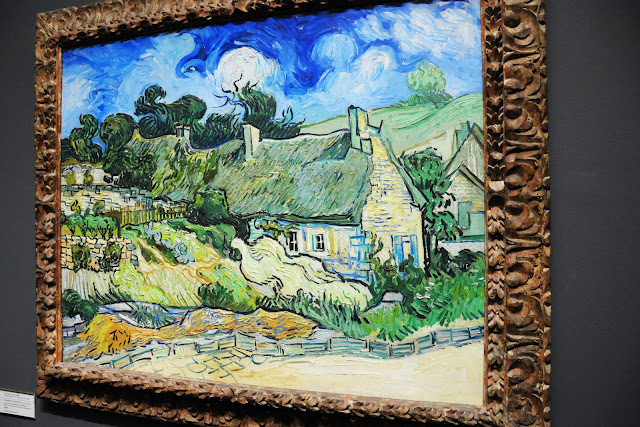 I was so excited to see they had a VanGogh exhibit at the time. He is one of my favorite artists. In my art class I have “studied” (which means, to try to copy by painting it, but only do a sub par job). I love to do studies of VanGogh’s work, I seem to learn the most from him. 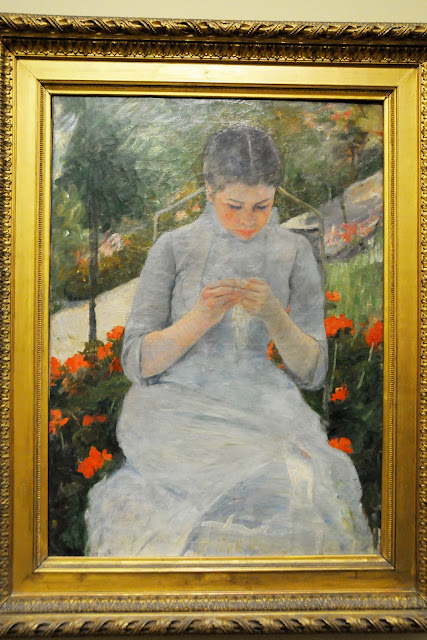 I only found one Cassat (maybe I wasn’t looking in the right place). Another of my favorite artists… 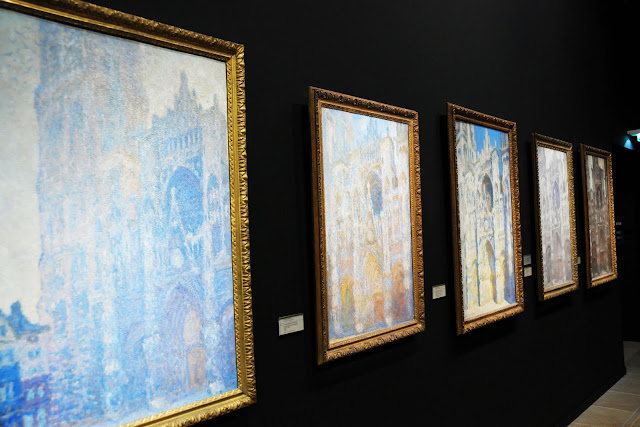 One of my favorite exhibits was this one. It’s a series done by Monet. It shows the same cathedral painted at different times of the day. I love how they had them all lined up next to each other so you could see the gradation in colors & light. 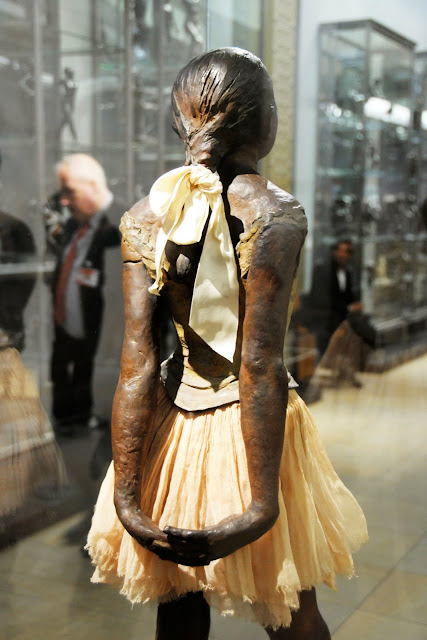 Degas ballerina sculpture. I LOVE this one.. do you see the satin ribbon in her hair? It’s really satin, and her skirt is fabric… soooo pretty!!!!!!!!! 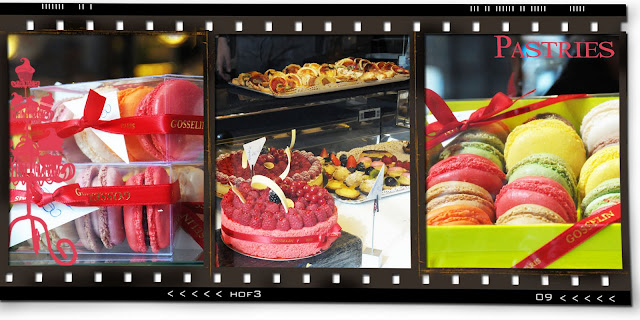 We found a great bakery right next to the subway stop, grabbed a snack and headed to the Champs d’Elysees for a couple of last minute things. (oh, I’m sooo in LOVE with Macaroons now)

After the Musee d’Orsay & shopping the plan was to drop our packages at the hotel then head to Sacre Couer for sunset & dinner. Well…. we dropped the packages, sat down for 5 minutes and fell asleep!!! Bad idea, never stop moving when you are on vacation!!

We scratched that plan and decided to do some shopping at Galleries du Layfette.  A GIGANTIC department store near our hotel.  And I mean GIGANTIC!! On the first floor you could by Hermes, Chanel, Tiffany’s, Rolex, Louis Vuitton, Gucci, Prada…. you name it – it was there!!

We worked our way upstairs and found a toy department.  We picked up a few little toys for the kids then decided it was time to find dinner.

Jeff wanted middle eastern food while we were there… I figured we should head to Le Marais, after a quick call to a friend who used to live in Paris, who agreed, we hopped on the subway in that direction.

We were tired, it was cold. I was starving.  I get grouchy when I don’t eat.

After realizing L’As du Falafel was closed we chose a sit down restaurant just down the block. (we also got a bit turned around and started walking the wrong way when we got off the subway, I was feeling a bit mixed up by this point)… 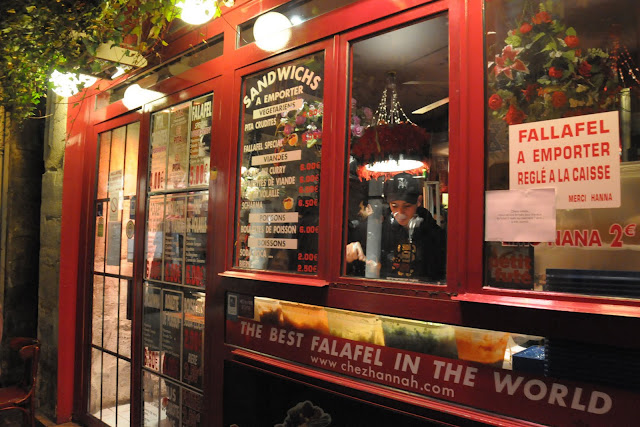 After waiting just a minute we sat down. This place was hopping!!! Full of people (which was a good sign)… Us and a group of people that walked in at the same time, sat all at one long table.

Everyone at the table next to us, ordered the “special”… (like 8 people) I figured “good idea, they are all getting it must be good!” (and it was)…

The waiter comes to our table, everyone orders “the special” including myself and Jeff says “I’ll take the Lamb”…

Okay… so he wants the lamb, no big deal.

5 minutes later, the waiter arrives with dinner for everyone else at our table but not us. I figure, “okay, just waiting for Jeff’s lamb”.

15 min later, the waiter brings 2 plates (both are the Falafel), one for me and one for Jeff, but no silverware.

By this point I am STARVING and so tempted to just eat with my fingers, the waiter brings some silverware and Jeff asks…

I’m thinking… not big deal, eat what he brought you…but the waiter is kind and wants to get Jeff the right food, so he apologizes and grabs Jeff’s plate to take it back

I was SECONDS from taking a bite!! and he took my food!!

I have to eat at the same time as Jeff he tells me… (yes I know this would be customary in the US also, but I was really hungry and didn’t care if Jeff just sat there and watch me eat).

So… I’m giving Jeff the “evil eye” for sending back perfectly good food (which btw, he NEVER does, totally  out of character for him)… Thinking, why didn’t you just KEEP the other food! This place was busy, we spoke no French so I’m thinking… just smile and go with the flow…

20 min later. We BOTH get our food. It was delicious.  Jeff takes a bite of my Falafel and agrees.. it’s better than his lamb…

and it was good… I could have eaten 2 plates… 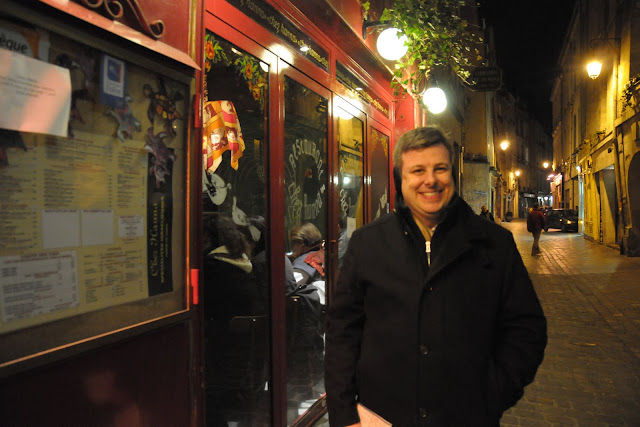 He is grinning in this photo, with a “sorry… should have kept the food grin”…

By this time it was 10:15 we missed seeing the Eiffel tower show again, but that’s okay… a good reason to go back to Paris!!

It was a wonderful even though quick trip… I know things that I would do differently next time and thing that I would do again for sure! Hopefully it will not be too long before I am able to go back again.  The French people were very welcoming to us, the city was easy to get around & completely inspiring.

Our flight home was smooth (we had a direct flight HALLELUJAH!), there was one little “incident’ on the plane that scared me pretty bad, (a passenger got drunk then someone from first class came and sat by him the entire flight hmmmmm….) Other than that, we got home and were soooo glad to see our kids.

If you would like to see the rest of my photos, I’ve uploaded them to flickr… here’s the link

More recipes you may enjoy