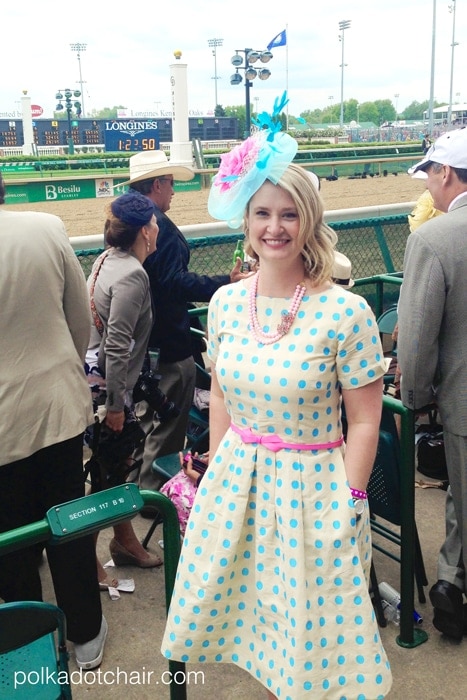 Hello!! I really hope that you have enjoyed reading all of my posts leading up to the Kentucky Derby last weekend. It really is a wonderful time of year to live in Louisville and I love being able to share a bit of it with you. 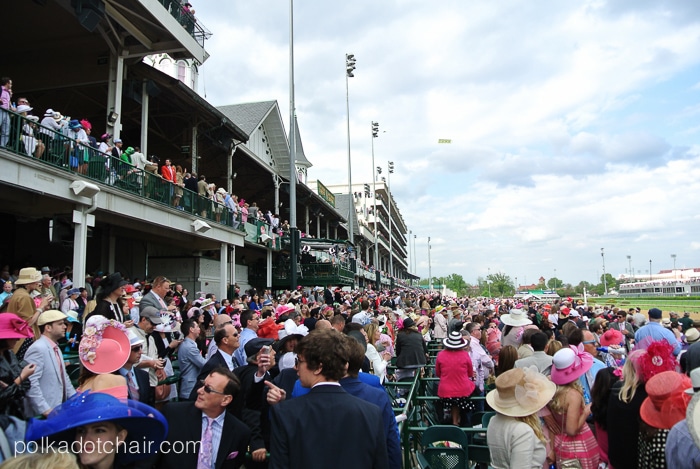 The Oaks race is actually just one race of about 12 all day long. It’s the equivalent of the Derby, but it is for the fillies. Since its a race day for the “girl” horses, it’s traditional to wear a bit of pink that day.

This year the weather was a bit chilly but we still ended up having a great day at the track. Let me tell you the people watching is THE. BEST. in the world, I’m not even kidding you.  The place was FULL of people in colorful outfits. Hats and bowties everywhere!! It’s not really a place for kids in my opinion as most of the crowd was quite inebriated- which also makes for entertaining people watching. 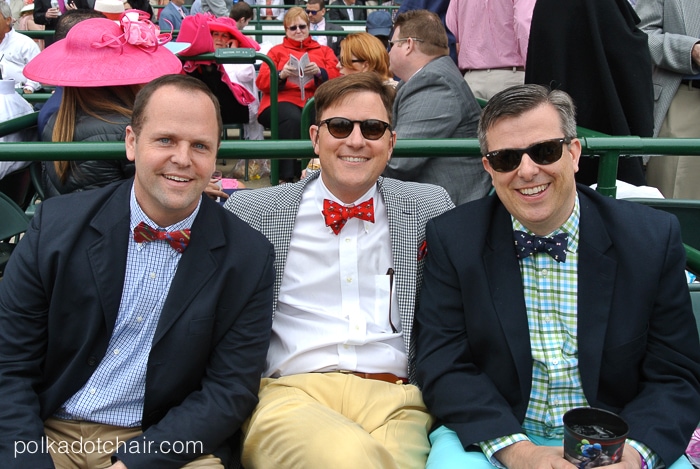 The guys in our group looked so handsome in all of their snazzy outfits.  Next year I think I’ve got Jeff convinced to let me make him a goofy hat to wear. 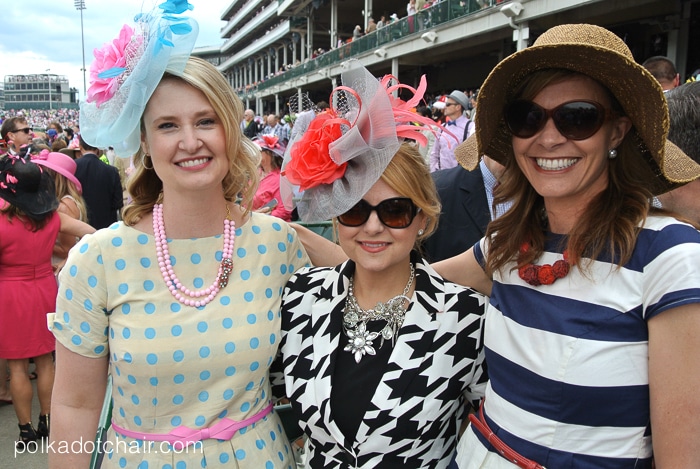 I posted a lot of updates on Instagram that day, it was seriously killing me not to just blow up everyone’s feeds, there were so many great photos everywhere.  The hats and outfits are TRULY fabulous…

This year instead of a hat, I decided to go with a fascinator,  friend Gretchen helped me make it.  She’s got a great eye for color and I’m so glad that she suggested the pinks to go with the blues in my dress (necklace is from Lulubelles.com) . 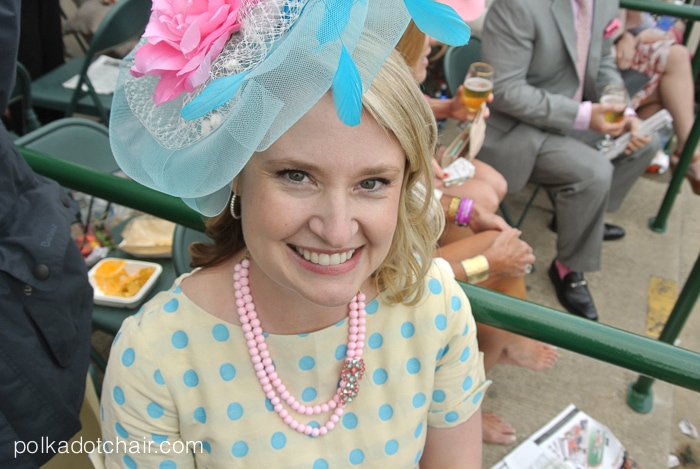 And speaking of my dress.. I made it! I seriously can’t believe I pulled it off. I can sew bags til the cows come home, but clothing is a whole ‘nother thing.

When I saw this polka dot fabric in Tissu in SLC I knew right away that I wanted it. Hello, it’s Polka Dotted!! I also knew I wanted to make a dress with it, and exactly what dress silhouette I wanted.

That was back in August.  This look was supposed to be my final “signature style” look for Project Sewn, obviously, I’m a bit late getting it done, as Project Sewn just started up it’s second run since I was on it. Pshhh… who says you have to sew fast ? *wink* 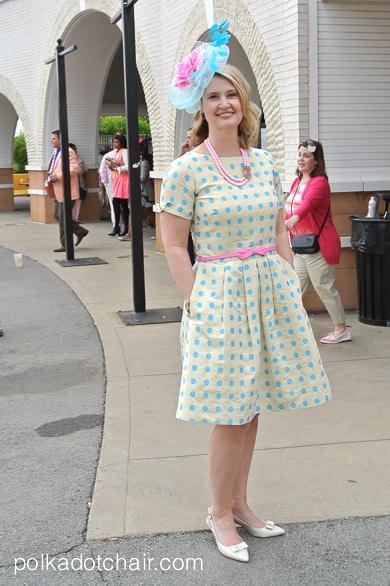 The pattern for the dress is New Look 6223- I made several modifications. I lengthened the bodice (it was about 2” too short for me). I also changed the pleats from knife pleats to inverted pleats. The knife pleats were too voluminous with the fabric (which is a cotton-silk blend).

I also ended up using the sleeve from Simplicity 1778 instead of the one that came with the pattern. I liked the little detail of the turned-up cuff on the sleeve.

The majority of the work in the dress was in fitting the bodice. The pattern was just not made to fit my body type well, because of that I might not make the same pattern again, but rather try another one.

I was actually surprised how few simple fit and flare dresses there are patterns of to pick from. I had a really hard time finding a pattern with a simple classic silhouette (that I could add sleeves to). 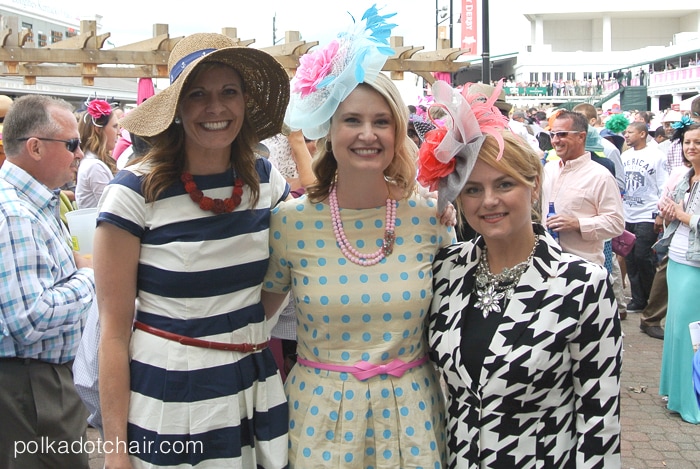 I had grand plans to get some really cool photos with me in the dress for the post. I mean I was at a really great location for a photoshoot right??? Well, it didn’t go exactly as planned, I forgot that 150K of my closest friends would be there too *wink*… and my husband kept mixing up the shutter button and the power button on the camera. Mental note- next time take photos before I get to Churchill Downs. 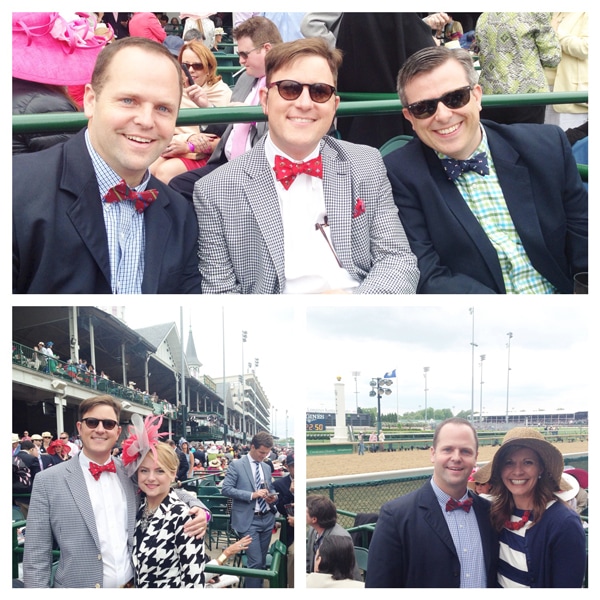 So far I’m doing pretty well with my goal in 2014 of making more clothing for myself. I’ve even got my next two projects picked out… I may end up becoming an apparel sewist after all!

oh btw… if anyone ever invites you to the Kentucky Derby or Oaks, say YES!! You’ll have a great time, trust me!!