A few years ago, my daughter got the idea to turn the flavors of Derby Pie into a Cupcake. We tried a few different versions and came up with a Derby Cupcake Recipe that we love! These brown sugar, pecan & chocolate chip cupcakes would be the perfect thing to serve at your Derby Party!

We had a fantastic weekend! I love that the Kentucky Derby turns the first weekend in May into one big week-long holiday here!

Friday, we went to Churchill Downs to watch the running of the Kentucky Oaks (the races the day before the Derby that attract just as big of a crowd). I love any excuse to wear a hat!

The horses are beautiful to watch run, but what’s even more fun is the people watching…

Beautiful hats and interesting characters everywhere! On Derby Day we had great fun celebrating with friends!

The horse we “drew” came in 3rd so we won a prize!

About our Derby Cupcakes

There is a tradition here in Louisville to eat Derby Pie on Derby day (or any day, as it is delicious!)

My 15 yr old daughter thought it might be fun to turn Derby Pie into a cupcake! We have been scheming how to do this since January. Now the original recipe for Derby pie is a copyrighted secret! (as is the name “derby pie”).

For those of you that have not heard of Derby pie, it’s pretty much a pecan pie with chocolate chips. Plus some other secret stuff. So there’s no way to make something exactly like it, but I tried to capture the flavors of Derby Pie and put them in a cupcake!

I am not a great baker, so I am thrilled (and surprised) that I could figure this one out.  It wasn’t easy to find a recipe to give you the same flavor as the pie.

The trick I figured out was incorporating brown sugar into both the batter and the icing. I started with a base recipe from the Martha Stewart cupcake book, then kept changing it until I got the flavor I wanted.

We served these at our Derby party, and they were a BIG HIT!  I ate 2 of them and am craving them again today! 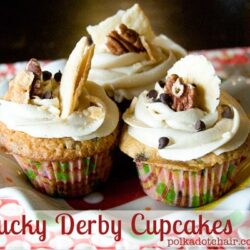 Keyword kentucky derby, pecan pie
Tried this recipe?Let us know how it was!

For LOADS of more Derby Party ideas and some FREE PRINTABLES, click here!!