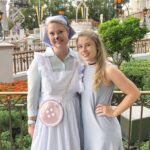 Today I’m sharing with you the last of our weekly series of simple DIY Halloween costume ideas. We are finishing up the week with some Cinderella Costume ideas that are perfect for teens and grown-ups!

A few years ago someone asked me what I was going to dress up as for Halloween (we were going to a Halloween party so it made sense that I’d need a costume). I said “I don’t know. I seem to always be sewing the Halloween costumes, not wearing them”!

That thought stuck with me and last year when our family made plans to attend the Mickeys’ Not So Scary Halloween Party at Disney World, I thought it might be the perfect time to dress up in “character” so to speak.

My daughter suggested that I go as the Sewing Mouse from Cinderella (I think her name is Perdita). She wanted to dress up like Cinderella, and we like to plan matching family costumes, so it was not an entirely guileless suggestion on her part.

To be honest with you, I planned my costume, got dressed in our hotel room, and almost didn’t walk out of the room. I got cold feet at the last minute. My husband (who was dressed up like a green alien at the time) encouraged me to just do it! I mean how often as a grown-up do you get to wear a fun costume?

Today I’m going to share with you the details of my and my daughter’s semi-homemade DIY Cinderella Halloween Costumes. Nothing in our costumes takes very long to make or throw together and you might even have some of the items in your closet right now.

My daughter’s costume goes with the teenager “don’t look like you tried too hard manta”.

Her costume could also be considered a Disney bounding outfit. A disneybound is an outfit designed to “look” like Disney characters without being an actual costume.

My costume was really simple to throw together. Ironically I did not sew the apron for it! I had full intention of doing so but ended up running out of time before we left.

Blue Shirt Dress: Any simple solid color midi-length dress will work. The mice in the cartoon wear purple, pink, and light blue. So you can just pick a color. My dress was from H&M. I love to buy clothing for Halloween costumes there because it’s pretty expensive and you’re not wasting a bunch of money on something that you might not wear again.

White Apron: Mine was purchased HERE. If you buy that apron you may need to shorten it a bit. You can also sew an apron here is a pattern that you can use.

Handkerchief for Hair: The handkerchief in my hair is an 18″ x 18″ square of fabric folded in half diagonally. I simply attached it with bobby pins.

Button Purse: I had grand ideas of making a giant pair of scissors to carry around with me. Then I realized they would probably not be allowed in the Magic Kingdom. I settled on making a purse for myself instead.

You can make a purse using the same method that I used for my Disney Purses – you can see it on this post.

Our Review of the Disney Halloween Party

In the end, I was so glad that I dressed up. The party was soooo much fun and almost everyone dresses up (Even the grown-ups!). My twins were seniors in high school last year and I know that we might not get the opportunity to spend Halloween with them again for a long time!

I keep joking with my husband that he and I need to go to Florida every October, just so we can still experience Halloween!