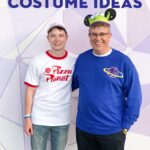 Over the past 10 years or so we have made a family tradition of visiting Walt Disney World for Fall Break and attending Mickey’s Not So Scary Halloween Party. We missed a few years but for the most part, we were able to make the trek down to Florida for the party.

Sometime along the way, I decided that our costumes for the Halloween party should match. I mean, where else can you get away with forcing your loved ones into matching family Halloween costumes than at Disney?

Over the years, we have had a lot of fun coming up with group costume ideas. Some years we could get the whole gang to match, and some years we matched in smaller groups. Last year was my kids’ Senior year of high school (they are twins), and I knew it would be the last time that we could attend the Halloween party with “most” of the members of our family in attendance, so in honor of this last Disney Halloween adventure I let them pick what they wanted to be.

We could not all agree on one Halloween costume theme, so we broke it up into two groups. My son and husband went as Pixar Toy Story characters, and my daughter and I dressed as Cinderella characters. My daughter and I could have gone as Bo Peep or in a Jessie costume, but my daughter was not a fan of either of those options.

Since my son was older, he did not want an “over the top” (as he called it) Halloween costume. So we opted for a Pizza Planet Delivery Driver instead of in a Buzz Lightyear costume.

My husband went as one of the Toy Story Green Aliens instead of a Woody costume. Both costumes were DIY’d I used my Cricut machine, and I’m happy to share how to make them with you.

How to Make the Pizza Planet Delivery Driver Costume

To be honest, this has to be one of my favorite Halloween costumes we’ve created over the years. It’s so simple but so obvious and funny at the same time. Perfect for a teenage boy that doesn’t want to look like he’s trying too hard! This is a great option to be part of a toy story group costume without actually wearing a costume if one member isn’t a fan of costumes, like my son.

After you have cut out the logo and DELIVERY, apply them to your t-shirt and a baseball cap. I recommend using a Cricut EasyPress to do this. It makes applying iron-on practically dummy-proof.

How To Make the Toy Story Alien Costume

How to get the Free SVG Files

Fill out the form below, and we will email you the files.

This costume is pretty simple as well. Cut out the Pizza Planet logo from 3 different colors of vinyl. Cut out the large oval from yellow vinyl, the pepperoni from red vinyl, and the large circle and mushrooms from orange vinyl.

Layer and apply to the t-shirt. Pair the costume with bright green shorts or pants.

To make this Green Alien costume really POP! the accessories are key, in this case, some sort of hat or headband. My husband wore a green alien-themed mickey ear hat we bought in Disney world, but Amazon also has some great options that are usually less expensive.

Our “view” in the car on the way to the Halloween Party!

Mickey’s Not So Scary Halloween Party

This is an after-hours Halloween Party that takes place in Disney Worlds Magic Kindom park and does require an extra ticket. The fun thing about this party is that it is one of the few times adult visitors are allowed to dress as their favorite Disney characters in the park.

Adults can dress up as their favorite Disney princesses or heroes for the party, keeping with the toy story theme, any of their favorite toys like Rex or Duke Caboom. There are, however, a few costume restrictions for those over the age of 14 to attend the party. You Can not wear a mask or bring in weapons (real or fake). If someone wanted to wear something with a detachable cape, that is fine as long as it does not go below the waist. If you are wanting to dress as Buzz Lightyear, wings, and all the wings can’t stick out too much and can’t have any pointy ends. For more information on the party and costume guidelines, visit Mickey’s Not So Scary Halloween Party webpage.

If you’re curious about what the Disney Halloween party is like, you can view the video on our families YouTube page here:

More Costume Ideas for Mickey’s Not So Scary Halloween Party