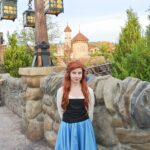 Our favorite time to visit Disney World is during October. My kids also love dreaming up their costumes for Mickey’s Not So Scary Halloween Party. We have had quite a few lively dinner conversations about what we were going as. Usually, the more “lively” conversations occurred in years where we were all trying to match our costumes. There always seemed to be one dissenter among the group.

So far, Peter Pan, Star Wars, Grecian, and Superhero-themed costumes have been considered. Each has always been nixed by one person who didn’t want to participate.  Many years my kids would beg me to buy them a costume at the store for Halloween.  I, not wanting to let go of the fun of sewing the costumes, would always say,  “No, you get a handmade costume!”

How to Make an Ariel Costume

This brings me to this year. One kid is off in college, and one is a teenage boy who is too “cool” for almost every costume on the planet.  The only one remotely excited about her costume this year was my teenage daughter. I knew that I had many work deadlines before we left for fall break, so I told my kids that we’d go to the store and pick out costumes this year. I had NO spare time to sew.

When I told my kids this, it was met with a resounding NOOOOO. Really? The ONE year I don’t have time to make a costume is the one where they don’t want a store-bought one? My daughter told me, “I’m going to be Ariel, on the Land, with a blue skirt, a red wig, and a big blue bow.”

She was determined that I should make her an Ariel Costume.

Two days before Fall break we headed off to Joann to pick up fabric to make an Ariel in a Dress on the Land Halloween Costume.

I did not make my son’s costume. It was easy enough, he wore my husband’s jacket from his Ichabod Crane costume a few years ago, then added the foam hat and beard.  Easy peasy (except he got overheated and ended up sick and almost left Disney World on a stretcher, he’s fine btw).

How to DIY the Skirt

The Ariel costume is actually quite simple to make.  It consists of two sewn items and 3 purchased items. None of the sewn items require any special skills. An advanced beginner should be able to make both.

This Ariel costume is designed for a teen, but you could also use this tutorial to make an Ariel Costume for an adult.

Purchase blue satin fabric that does not fray (so that you don’t need to hem it). Then make a circle skirt. Here is a free tutorial for a Circle Skirt. It’s SO EASY, trust me.

We purchased a peasant shirt then I made her vest.

To make the vest:

Measure around the widest part of your model’s torso then and add 1″. Measure the and the height of their torso. Note both of these measurements and cut a piece of faux black suede those sides.

Add a separating zipper to the back seam (essentially making a fabric tube that was held together by a zipper) then zip the vest onto the model inside out.

Simply pin the excess fabric under the arms until it is the same shape as the model. You are essentially creating side seams and darts at the same time. Sew up these seams.

Once we got to Disney World, she had the idea to pin Flounder to her skirt, which I thought gave the costume fun and clever touch.

The wig is from Amazon; I made a big blue bow and pinned it to the wig with my extra fabric. Make a bow, cut out a long rectangle of fabric, fold it in half, and “cinch” it with another piece of fabric. Safety pin the bow on the wig (since it’s not real hair, you can even sew it on).

Mickey’s Not So Scary Halloween Party; Our Review

(hubby and I went as Mousketeers, an easy costume to throw together at the last-minute)

The last time we were at Disney, we attended the Halloween Party and were not 100% sure we would go again. It was so crowded compared to years past. We could barely walk down the street; there were so many people.

To top it off, my husband and I got food poisoning from a drinking fountain that night.  We decided to give it  “one more try.” I’m happy to say that the crowds were perfect. Crowded, yes, but not overwhelming, and we could walk onto most of the rides.

Disney also added many fun activities to the party, and I was thrilled we decided to go again.

Everything was fine the night of the party until my son when on a ride, got off and said he didn’t “feel so good.” To make a long story short, he got sick and dizzy and wouldn’t stand up or walk.

Disney noticed. Ten minutes later, there were 3 paramedics, a cop, a fireman, and about a dozen Disney employees around us.  I will have to say that Disney is über prepared for sick kids; they were very nice and helpful. Yes, they can drive an ambulance into the Magic Kingdom.

After checking him out, they decided he didn’t need to go to the hospital. He did end up leaving the Magic Kingdom that night in a wheelchair. It was memorable for sure. My daughter made sure I knew she was mad she missed the Halloween parade and most of the party (oh, the perils of being a twin).

I think we still need to go back to the Halloween party again, though; we need to try to “break” our streak of bad luck with it.

Looking for more Disney DIY Costume Ideas? Try some of these