Today I thought it would be fun to share with you a bit about what it is like to have a booth at the Spring Quilt Market. For those of you that don’t know, Quilt Market is a twice per year trade show. It is for professionals in the quilting and sewing industries. It’s not a public show, but rather one that is set up for those involved in the business side of quilting. Manufacturers bring their goods (mostly fabric and notions) and put them on display so that buyers can decide what they’d like to carry in their stores.

I had a booth at Spring Market in SLC last year. So this was my second time with a booth, and I have to say that it felt like a totally different experience to me. I was not sure I’d have a booth again after SLC last year, not because anything was bad per se, more that I just didn’t see the benefit of it for me personally. The line I was showing (Wonderland) was already in stores so a bit of the “sneak peek” aspect of market was not there. Plus, I was in the process of having my patterns printed, so I didn’t have anything to sell.  I looked at that market as a way to “learn the ropes” and tried to manage my expectations for the event.

I met Nancy Zieman, she also designs for Riley Blake

This market I was showing my Safari Party line, which does not ship until July.  Which means that this was the first time that I had the opportunity to show people what I had in mind when I designed the line. To be honest, I had no idea what people would think, but was cautiously optimistic.

Before I go much further let me “back up” a bit.  Recently, I was listening to a pod cast by Young House Love (totally recommend them btw) and they were talking about how hard things can be when you’re in the middle. It really resonated with me because it seemed to “sum up” well how I was feeling right before market.

Here’s a brief summary of their podcast. At the beginning of a project you are excited. You’re planning and your brain is spinning a million miles a minute. You develop your idea, and see it begin to take shape. Then you hit the ‘middle’. That spot where you’re not done, you can’t see your finished project, and much of the excitement that you had when you first got the idea has begun to wane.

That’s pretty much how I felt from February til last week. The excitement of the line had begun to pass  (at least for me, the world had not even seen it yet — FYI: it takes most fabric lines well over a year to go from print to design and many take much longer than that).   I wasn’t close enough to the end of the project (the part where I get to show it to the world) to get that “bump” of enthusiasm that I think we all crave.  I felt mostly mired down by quilts to piece, designs to finalize and a million other small details. I was feeling pretty discouraged. Most of that feeling was self inflicted *wink*.  After I listened to that pod cast (I believe they also have a blog post about ‘the middle’ if you want to google it) I took a deep breath and just realized that I was in the dreaded ‘middle’ and I just needed to power through.

Que, last week. I left Louisville with my good friend (I needed help with booth set up) and pulled onto the freeway to head towards St. Louis for market.  Half way to St. Louis, my windshield trim piece blew loose. The winds were so crazy through Illinois and the wind managed to pop the trim off my car. We pulled off and tried to put it back together but were not successful. We ended up stopping at a Walmart along the way and duct taping the trim back on.  Talk about a classy way to arrive somewhere, with your car duct taped together!

Basically we rolled into St. Louis with a duct taped windshield and a car full of giant stuffed animals. By the time we arrived at the hotel and realized that we had to valet park and unload all the giant animals onto a luggage cart, I started laughing so hard that I thought I’d pee my pants (I did not thank goodness, which would have made a crazy situation even crazier).

We woke up the next morning and set up our booth. I was sharing with  Amy from Diary of a Quilter which worked out great since we’ve known each other for years. Her debut line, Gingham Girls is in stores NOW! Hop on over to her blog to see more about her fun new line!

Set up was pretty painless, thankfully the crazy of the day before had subsided. The way that market works is that you set up the day before then the show opens and you spend time around your booth meeting shop owners and answering questions about your fabric line or patterns. People from the press and other bloggers (they are referred to as Industry Professionals by the Quilt Market peeps) also stop by. That part is actually pretty fun since you get to meet people from all over the world!

Now that you know a bit about WHY I have this crazy set up of giraffes and zebras, I’m excited now to show you some shots of my booth! EVERY project in the booth will either be a pattern or a free tutorial. So don’t worry about “how to make” anything you see yet. I promise they will all be shared in time. The fabric does not ship until July, so to avoid a lot of confusion, I’ll wait until then to start sharing specifics. Just know your local shops won’t have the fabric yet. If you’re interested in it, just ask them if they will be carrying it this summer.

Let me just say that I was pleasantly surprised by the reaction to the line and the patterns at market! I feel like it was really worth my time to go. The line is fun and bright and I think is one that shows best when sewn into projects.

I won’t go into a lot of detail about the projects, because honestly I know you just want to look at the pictures  *wink*. Speaking of pictures, the lighting was terrible in the convention center. I did my best to edit them, but they are still not great.

The booth featured 3 quilts. The “plus” quilt and the giant zebra quilt will be patterns coming in July (both PDF and print). The 3rd quilt will be part of a “sew along”  on this blog later this summer.

Close up of some of the prints in the line.

Alice Bag sewn in the laminate fabric from the line.

Oliver +S Hide and Seek Dress with a bit of pom pom trim.

Closer up shot of the Alice bag. It’s the larger size of the two on the pattern and the straps were moved to the zipper (more on that in another post).

Zebra Quilt Patter that is coming in July – it will be a machine applique pattern in two sizes. One for a quilt and one for a pillow.

So that’s a bit about what has been CONSUMING my life for the past 3 months or so. To be honest, I’m so glad it’s over now and I can start working on some fun summer sewing projects.

Before I let you go, I thought I’d share with you some other fun booths and projects that I spotted at Market. I’ll mention each designer (and link to their site when I can) below their photos so you can get specifics from them about patterns and fabric lines.

The Tattooed Quilter’s DEBUT line, Blue Carolina for Riley Blake – can’t wait to get my hands on some!

My Minds Eye for Riley Blake – that fabric is metallic rose gold. It’s even more “swoon” worthy in person. 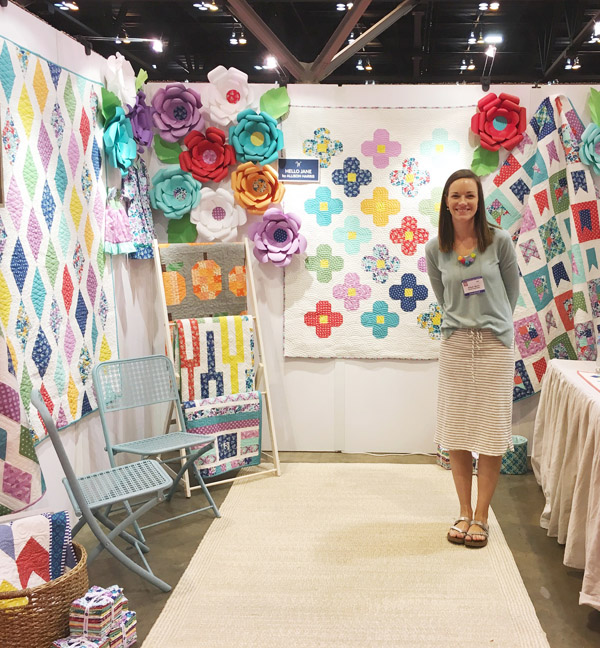 Cloud 9 Fabrics – I believe this will be a free pattern, keep an eye on their site for it.

Jessica Jones for Cloud 9 – the fabrics are fine whale corduroy and SO SOFT! 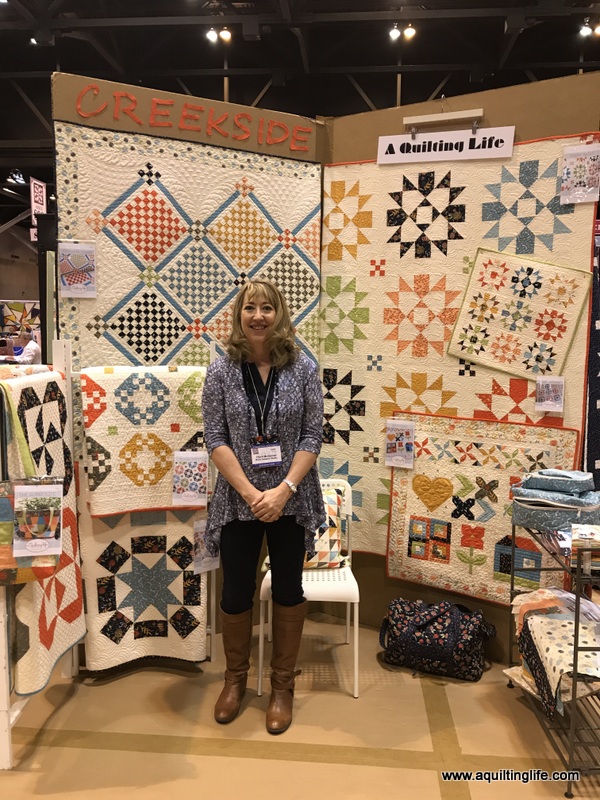 That’s just a small sampling of what was released at market. By the looks of things, I think that we will all have plenty of new and fun things on our “to sew and to quilt” lists this summer and fall!