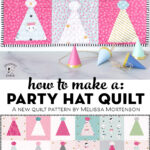 Who doesn’t love a great party? And what party is complete without a party hat! Today I’m excited to introduce you to my Party Hat Quilt Pattern!

Okay, so that title is only slightly deceptive *wink*. Last November I released my Santa’s Hat Shop quilt pattern.

Then, in February I realized that the Santa’s Hat quilt block looked just like a party hat when stitched up in different fabrics. There was only ONE piece in the whole pattern that needed to be changed to create a party hat instead of a Santa Hat.

As I was preparing samples for Quilt Market I thought it would be fun to stitch up a mini quilt using the new Party Hat Quilt blocks. (I also needed to test the party hat blocks). The fabric is from my Chloe & Friends line that is due to arrive in stores in October.

Here is a mockup of an entire quilt made with Party Hat Blocks.

I know that some of you don’t love Foundation Paper Piecing. When I first created the Santa’s Hat Shop pattern I tried to traditionally piece the block but couldn’t get it quite right. Recently I thought I’d give it another shot and using a slightly different method. It worked.

Today I’m happy to announce that you can make the blocks using EITHER Traditional piecing or Foundation paper piecing.

This applies to the Hat Blocks only as the JOY blocks in the quilt still need to be Foundation Paper Pieced.

This pattern would also be cute to make a fun table runner to use for Birthday celebrations!

How to Get the Pattern

Today I’m excited to re-release the pattern. If you purchased it in the past you should have been sent an email to download the new version for free. If you bought it on Etsy we will have to manually send you a new link- just use the contact button above to let us know.

To grab the pattern, you can use the links below or CLICK HERE. Note if you are outside of the United States you will need to order via our Etsy shop.

This pattern is also available in a Print form that is mailed to you.

How to Make the Party Hat Mini Quilt

I wanted to try some “off center” piecing for the Party Hat Mini quilt. After I made my blocks, using a 9 ½″ square ruler I began trimming the blocks down randomly.

I tried to make it as random as possible, trimming some more to the left and some more to the top. I made sure to leave ½″ on the edge of the hat pieces so that I had plenty of fabric for a seam allowance.

Next, I stitched 9 of them together to create a fun mini. I love that it has a slightly “wonky” feel, especially since it’s for a party, things should feel a bit off centered.

How to Make a Ghost Quilt Block