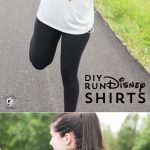 If you’ve been a long-time reader, then you may know that I love all things, Disney. You can find several DIY Disney projects on this site as evidence. To be honest, with you I’ve never run in a Disney Marathon. I never say never, but I’m also not holding my breath that I will one today.

The project shared in today’s post is one that I’ve received several requests for lately: making runDisney Shirts.  So, as Genie would say “your wish is my command”, I now give you, DIY Run Disney Shirts and SVG Cut Files!  This is a sponsored post. I work as a paid Ambassador for Cricut.

How to make DIY runDisney Shirts

I feel like I should preface this post with “I am not a runner”.  I don’t have an athletic bone in my body and wouldn’t want you to get the wrong idea about me *wink*.  Most days I’m doing good not to fall off of my Peloton bike.  I can also make it through most of a Pilates class without getting tangled in the ropes (note, I said “most”.)

One of my dearest friends has run several runDisney marathons.  She’s a huge Disney fan like me and has been trying to talk me into running one with her for years.  This year she told me I could just walk during the race, it didn’t matter. I don’t know, we will see, I do walk faster than some people run.

(My oldest daughter, who is the model for these photos, told me she only run as much as her field hockey coach made her, my son does, however, run on purpose *wink*)

I have several DIY Disney shirt SVG files on this site.  A few months ago, I got a request to modify one for a run Disney event. Unfortunately, I couldn’t do it at the time but promised that I’d design some run Disney SVG files in the future. After that, I got two more requests, and decided to bump this project up a few months!

Since Cricut has a license for many Disney images, I thought that this month’s Cricut blog post would be a fun one to create some DIY Run Disney Shirts!

All of the shirts in today’s post are made using the new Cricut SportFlex Iron-on. If you’ve not seen it before, it’s an iron-on material designed especially for workout clothes. It’s made to stretch with the clothes and adhere to the types of fabrics that work out clothes are often made from.

How to Get the Free RunDisney Cricut Files

Cricut SVG File: Note: all files in the Library are for personal use only. You may not sell items you make with the files. To get these files into the Cricut Design space, you need to visit OUR CRICUT LIBRARY and follow the directions. When prompted, select the button and save the file as an SVG to your computer. Please do not open it in a new window. It will load as an image, not an SVG. Next, go to the Cricut Design Space page with your browser. Select NEW when the screen pops up; select IMAGE. Then select – upload. Upload the image you obtained. It’s ready to use in Design Space!

Images Included in the RunDisney Bundle

1. “Will Run for Dole Whip” Shirt and SVG File

The first shirt I designed was this “Will Run for Dole Whips” one.  It was actually the first idea that I got for a running shirt after we visited Disney last August and I made a joke about being willing to run to have YET another Dole Whip that day.

To make the shirt, grab the applicable file from the Library page (link in supplies above). Import the image into the Cricut Design Space, then using your mouse highlight the entire image. On the toolbar on the right-hand side of the screen select ATTACH.

Select MAKE IT, then select “mirror image”, select SportFlex from the materials list, and proceed as directed.

A fun take on the classic Cinderella story. “Run Like Cinderella at 1 minute to Midnight” is superimposed on a Carriage Silhouette.

I mean she does run pretty fast in the movie!

Since Disney also hosts a Star Wars Marathon, and since Solo just came out last weekend, I thought it would be fun to do a Star Wars-inspired shirt as well. In this case, I decided to make a jacket since it seemed like the kind of thing you’d throw on after a race.

You can grab the file on the Cricut Library page, it says “Just finished the Kessel Run in 12 Parsecs”

Upload the file to Design Space, highlight all of the text then select ATTACH. You’re now ready to go!

So all you runDisney fans, I hope these t-shirt designs are what you’re looking for! If I ever run a race (of any kind) I’ll be sure to let you know *wink*

To find out more about the SportFlex Iron-On, you can read THIS post with more details about the project.

How to Monogram your Converse

This is a sponsored conversation written by me on behalf of Cricut. The opinions and text are all mine.